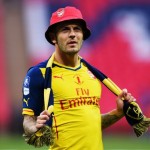 Reports are out claiming that Jack Wilshere has taken to Twitter to apologise for his apparent erratic behaviour during Arsenal’s FA Cup celebrations.

Wilshere’s expletive-laden chants, which are often sung by Arsenal fans in the terraces, have been slammed by some sections of the media and the England international was quick to offer an apology via social media on Monday.