Reports are out claiming that Nicky Shorey believes the competition for places for the left-back role in the England national team is a major bonus. 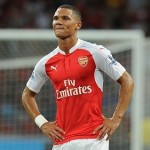 With Manchester United youngster Luke Shaw set to be sidelined for up to nine months with a broken leg, and Everton star Leighton Baines still out of action, the likes of Ryan Bertrand (Southampton) and Kieran Gibbs (Arsenal) are vying for the starting spot under Roy Hodgson.

Throw into the mix promising West Ham United talent Aaron Cresswell and former Reading, Aston Villa and West Bromwich Albion man Shorey is confident that position will be taken care of for years to come.

“I think it’s a position where there is a lot of competition and that bodes well for the future,” Shorey, who now plays for Pune City in the Indian Super League, told Sky Sports.

“There are a lot of good left-backs flying about, you’ve got Luke Shaw, Ryan Bertrand and Kieran Gibbs who is a very good prospect if he can stay fit.

“You’ve obviously got Leighton Baines who has experience and is more of an older head and has proved what a good player he is and Aaron Cresswell at West Ham continues to progress. So there’s a lot to be hopeful for in that position for England and they are all at a good age as well.”