Reports have emerged claiming that Arsenal attacker Lukas Podolski is on the brink of signing for Galatasaray. 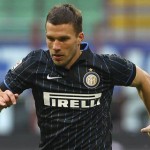 The Germany international, after a disappointing loan spell with Inter Milan last season, has been also linked with Everton.

But Aksam says Gala are locked in negotiations with Arsenal over a fee for Podolski.

Gala are confident of agreeing a €2 million deal for Podolski, with a three-year contract offer also on the table.

It’s been suggested Podolski has already passed a Gala medical in Istanbul. Zlatan Ibrahimovic : No One Expected AC Milan To Trash Arsenal!