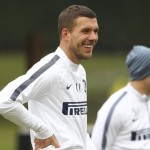 The German international striker is on-loan at Inter from Arsenal.

“They love and live for football,” he told Bild newspaper.

“It’s fantastic to play football there.

“I would not begrudge the Brits the title. They would deserve it.”

Arsenal Legend Robert Pires Set To Come Out Of Retirement