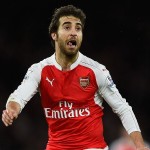 Reports are out claiming that Arsenal midfielder Mathieu Flamini is keen on a move to MLS.

The Frenchman comes off contract at Arsenal in June.

Sportmediaset says Flamini, formerly of AC Milan, is due to open talks with a number of MLS sides about a switch to the States.

Flamini has won three FA Cups during his two spells at Arsenal and also played a pivotal role at left-back during the club’s run to the 2006 Champions League final.