Arsenal midfielder Mesut Ozil has declared that he has adapted to life well in the English capital, two years after moving to London. 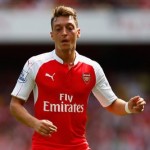 The German international joined Arsenal from Real Madrid in the summer of 2013 for £42.5million.

While his performances on the park have been somewhat hit and miss, the 26-year-old told Arsenal’s official website he has enjoyed the opportunity to immerse himself in English culture since arriving at the Emirates Stadium.

“When I joined the club, I knew some players from playing alongside them in the national team or at Werder Bremen,” Ozil said.

“But in general, I enjoy being able to meet new people and experience new cultures.

“I lived in Spain and got to know the wonderful culture and people there. Now I’m in England, where I’m learning the language and the culture.” Arsenal Legend Thierry Henry Retires : See You On The Other Side!