Reports are out claiming that Mesut Ozil believes that his disallowed goal against Bayern Munich should have stood. 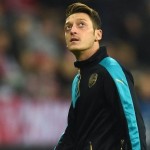 The German international had found the back of the net against Bayern Munich during Arsenal’s 5-1 defeat in the Champions League in midweek.

Unfortunately the goal did not stand as Ozil was deemed to have played the ball with his hand. The disallowed strike proved to be crucial in the complexion of the game as it would have meant that Arsenal had grabbed an equalizer in the 11th minute.

Ozil was clearly not happy with the decision during the game and the attacking midfielder still believes that the goal should have stood. Arsenal Disappointed As Juventus Hold On To Martin Caceres