Reports have emerged claiming that Nacho Monreal is ready to leave Arsenal. 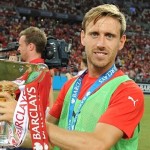 Monreal, who has become an integral part of Arsene Wenger’s squad, has been linked with a move back to Spain in recent months.

Marca reported that the 29-year-old, who joined the Gunners in 2013, has agreed a two-year contract with Athletic Bilbao.

The La Liga side have splashed out £6m to acquire the former Malaga star’s services. Reading On The Verge Of Signing Marseille Striker Jordan Ayew