Reports have emerged claiming that London’s trio of Harry Kane, Olivier Giroud and Eden Hazard will compete with Jordan Henderson and Marouane Fellaini for March’s PFA fan’s player of the month. 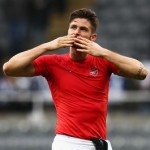 Tottenham forward Kane scored five goals during the month which included his first Premier League hat-trick against Leicester City. Kane could sign off the month in remarkable fashion with his senior international debut after earning his first England call-up.

Arsenal striker Giroud also scored an incredible six goals in six games during the month and appears to be hitting peak form for the Gunners after struggling in the earlier part of the season due to injury.

Chelsea playmaker Hazard has also had an impressive month, netting four goals including the opener against Hull City on Sunday whereas Man Utd’s Fellaini was the vital part of his side’s impressive victories over Tottenham and Liverpool.

Liverpool midfielder Henderson is an outside choice for the award.

Voting closes at midnight on Tuesday 31st March with the winner to be announced on Wednesday 1st April.