Reports are out claiming that Olivier Giroud was back in goalscoring form for France on Sunday. 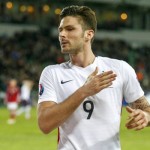 The Arsenal striker scored twice inside the opening six minutes as Les Bleus recorded a 2-1 friendly win over Denmark in Copenhagen as they continue their preparations for next summer’s UEFA tournament in their home country.

28-year-old Giroud was under a form cloud prior to the double-header against Armenia and Denmark, with manager Didier Deschamps commenting on the fact he had scored just one goal in his last 10 international appearances.

But Giroud shrugged off the negativity by firing the French to a fourth straight victory with a fourth-minute finish, courtesy of a spill from Leicester City keeper Kasper Schmeichel, before a volley from a Lucas Digne cross two minutes later fell nicely for the Gunners star who followed up on the rebound.

Erik Sviatchenko pulled one back for the Danes in injury-time but it was not enough to deny the visiting French.