Reports are out claiming that Arsenal starlet Alex Oxlade-Chamberlain wants to become a more consistent goal scorer as he aims to secure a spot in Roy Hodgson’s England squad for Euro 2016. 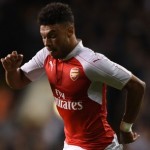 The 22-year-old found the back of the net in England’s 3-0 win over Lithuania in their final qualifying match on Monday night.

The goal was Oxlade-Chamberlain’s fifth in 24 international appearances for the Three Lions – a return which dwarfs his efforts at club level for the Gunners, where he has managed only six goals in 86 appearances.

The winger is determined to improve that aspect of his game ahead of next year’s European Championships in France.

“It is definitely something I think of,” Oxlade-Chamberlain said.

“It’s something as an attacking player you have to be aware of.

“You can’t force it too much because you start to do the wrong things on the pitch if you try to force shots that are not on.

“It is definitely something I think about and work on. I watch games back and see positions, it’s more so for me getting in the right positions to score the easy goals as they say.