Reports are out claiming that Arsenal hero Alex Oxlade-Chamberlain was delighted after scoring the winning goal in the Community Shield match at Wembley on Sunday. 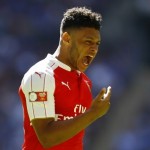 ‘The Ox’, who was also named Man of the Match, also continued his good recent form at the home of English football which is the scene of the Gunners’ back-to-back FA Cup triumphs.

“It’s really nice to come to Wembley and win. We wanted to keep our good streak here going,” he said.

“We are delighted to win another trophy and for me personally, I’m happy I got the winner.

“I don’t actually think I’ve lost at Wembley. Long may it continue.”