Reports are out claiming that Alex Oxlade-Chamberlain is to undergo a scan to determine the severity of the knee and ankle injury he suffered against Barcelona on Tuesday night. 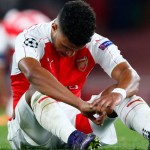 There are fears that the 22 year old England international faces a lengthy spell on the sidelines, meaning he would miss the friendly matches against Germany and Holland next month.

But Gunners boss Arsene Wenger has so far only ruled him out of Sunday’s trip to Manchester United.

Speaking to the club website, Wenger said: “He has a scan today (Thursday), he will not be available for Sunday.”