Reports are out claiming that Per Mertesacker was shaken but uninjured after being involved in a car crash on Monday. 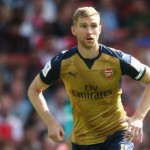 The German defender’s car aquaplaned off the M1 during a torrential downpour while he was on his way home from training.

A club source says Mertesacker was a little shaken up by the event but is fine and will return to training as the Gunners prepare for Wednesday night’s Champions League opener against Dynamo Zagreb.

“Per had an accident after he left training this morning when he went onto the M1 returning home,” said the club source.

“The car aquaplaned into the crash area on the central reservation.

“He was shaken up but not injured. No other vehicles were involved and there was no one else in his car.

“It’s not a big deal. Per is fine and ready to return to training.” PSG To Decide The Future Of Arsenal Target Adrien Rabiot