Reports are out claiming that Arsenal are set to stall their pursuit of Bayer Leverkusen star Lars Bender after the midfielder underwent surgery. 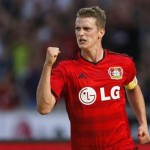 Arsenal had targeted Bender following the injury suffered by Francis Coquelin but as a blow, the German international recently sustained an ankle injury.

It has now been revealed that Bender has successfully undergone surgery and will be out until at least the New Year which is likely to end the Gunners’ pursuit of the 26-year-old.

Leverkusen released the following statement: “Lars Bender has successfully undergone surgery on his right ankle in a hospital in Basel on Tuesday. The Leverkusen captain will remain in Switzerland for a week and then start his recovery in Leverkusen.

“An operation had become necessary due to his ongoing problems. Bender will be unavailable for the remainder of 2015.”

As a result of Bender’s injury, it is now believed that Arsenal will be keeping their pursuit of the midfielder on hold and revisit their interest only when he makes a full recovery.