It has been reported that Aaron Ramsey has welcomed Danny Welbeck to Arsenal. 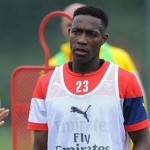 The former Manchester United striker is set to make his Arsenal debut against Manchester City.

The Wales international said : “He showed for England what a good player he is with those two goals,”.

“He’s a player who is very good technically, can get in behind teams and score goals. Hopefully he’ll do well for us.

“He brings runs in behind, pace, and power and his finishing will benefit us for the rest of the season.”