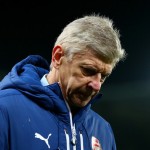 The French tactician has been the subject of plenty of negative press due to the Gunners’ up and down results this season but Ramsey has backed his boss following their 4-1 Champions League win over Galatasaray.

The Wales international feels Wenger is certainly the right man to lead the north London club despite calls from some sections of supporters to end his lengthy spell as Arsenal manager.

“Every player here wants to work hard for him [Wenger], we have proven that again,” Ramsey, who netted a classy brace, told the Evening Standard.

“He has been under some unfair criticism but we are in it together. We wanted to get the result for us and for him.

“Whenever we go into a game, he knows our qualities, always believes in us and gives us a great feeling. Every time we go out there we are representing ourselves, our club and our manager.”

Arsenal, who sit sixth on the Premier League table, will look to bounce back from last weekend’s shock 3-2 loss at Stoke City when they host seventh-placed Newcastle United on Saturday.