Reports are out claiming that Arsenal midfielder Aaron Ramsey has revealed that losing his Wales captaincy has never proven a burden for him. 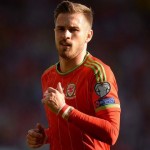 The 24-year-old was relieved of his duties by current manager Chris Coleman following the humiliating 6-1 World Cup qualifying defeat in Serbia in September 2012.

Ramsey was replaced by Ashley Williams which he admits was a disappointment but has never let it affect his game.

“There was no point in throwing my toys out of the pram when the boss told me,” said Ramsey.

“I just had to get my head down and work hard. You know, maybe I will get it back one day and I will be proud to do that and hopefully I can achieve that again.

“In the meantime it is great to be a part of this. I try to be a leader on the pitch anyway. I am very experienced for my age and definitely playing in the big games for Arsenal in the Champions League only helps me in these sort of matches for Wales.

“Hopefully I can continue that and continue to have an influence on games.”