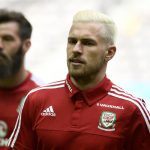 Reports are out claiming that Arsenal’s Aaron Ramsey is daring to dream ahead of Euro2016.

The Wales midfielder believes Leicester City’s Premier League title triumph last season can be the motivation for the Dragons at this summer’s European Championships.

“I think there’s been stranger things happen [than Wales winning the tournament],” Ramsey said of the Welsh team, that is ranked an 80-1 outside chance in France.

“You saw the Leicester odds. Anything can happen.”

The Welsh open their Group B campaign against Russia in Marseille on Saturday before taking on England and then Slovakia in their remaining group stage fixtures.