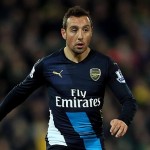 Reports are out claiming that Arsenal midfielder Santi Cazorla has disputed his manager’s assessment of his recovery, claiming he will be back by the start of next month.

On Tuesday Arsene Wenger warned that the 31-year-old could be a doubt for much of the remainder of the season having picked up damage to his Achilles whilst recovering from the knee injury that has sidelined him since November.

However the Spanish international has thrown doubt on to Wenger’s assessment of his injury, posting on his Twitter account that his recovery was going as expected and he hoped to return by April 1.

“Surprised by the piece of news appeared in press, deadlines are going as planned. I will be ready on 1st April. #workinghard”