It has been reported that Arsenal midfielder Santi Cazorla has discussed his departure from Malaga. 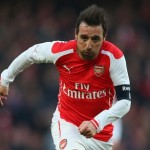 The 30-year-old playmaker has been a key member of Arsene Wenger’s side since his £15m move.

“I left because the club needed money,” Cazorla said. “Arsenal was a good opportunity, but Malaga wasn’t stable and it wasn’t clear where they were headed.