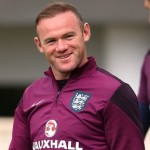 The Manchester United star scored his 49th goal for the Three Lions in Saturday’s 6-0 rout of San Marino which drew him level with Sir Bobby Charlton as England’s top scorers in history.

As England prepare for Tuesday’s clash with Switzerland at Wembley, Arsenal’s Walcott has lavished plenty of praise the soon-to-be sole record holder.

“What can you say? Wayne has been doing it for years,” said Walcott.

“It just shows how established he is as an England international and a Manchester United player.

“He is so good in that dressing room, he is a winner. In training, he always wants to win – never wants to lose.

“He just wants to improve and improve this team.

“He has that belief in this dressing room that this young talent can actually go on and do something special and I believe that too.”