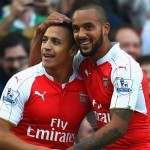 “I think we wanted it more,” he said.

“You could sense from kick off that the desire was there . We need that in every game. We should be playing like that every week.

“That first half we were unbelievable, no one could have dealt with us. It was the best football I have been involved in.

“It was the Arsenal of old, everything seemed to click. It sends a message to the Premier League, we are here to be recognised no doubt.”