It has been reported that Arsenal’s Theo Walcott insists he will not look to get too far ahead of himself as he continues his journey towards full fitness. 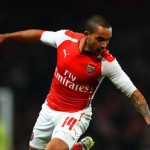 The 25-year old winger made the line-up for Sunday’s FA Cup third round win over Hull City which was his first start in 12 months following a serious knee injury but he has made it clear that he is not rushing himself to be back in top form immediately.

“I like to work week by week, so I forget about the big picture and the nine months (out). Week by week, hitting the goals and when you have achieved that, you can feel good about hitting something else,” Walcott said on Arsenal Player.

“You need to just come into training with a smile on your face, enjoy it and that’s all you can do.

“I remember when I had one of my injuries before, I came in down in the dumps and rehab seemed to take so much longer.

“You don’t want that, you want to come in and feel like you’re doing something each day.

“Even though it might be the same things at the start, you benefit when it comes to the end of it.”

Walcott will look to build on his match form and fitness when the Gunners return to Premier League action with a home fixture against Stoke City on Sunday.