Reports are out claiming that Theo Walcott says England are gunning for maximum points in all 10 of their Euro2016 qualifiers. 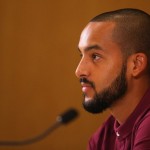 The Three Lions have won eight from eight thus far and according to Arsenal star Walcott, are not planning to stop there as they prepare for Friday’s home meeting with Estonia and Monday’s clash with Lithuania in Vilnius.

“It’s an opportunity for players on the brink of the squad to show the manager what they can do, but it will be a great achievement to win 10 out of 10.

“I know people will say the group’s not the best in the world but every international game is difficult and you have to give credit to the guys.

“We won’t get ahead of ourselves, but not many teams have done it.”