It has been reported that Arsenal manager Arsene Wenger is not too perturbed by comments made by Stoke City captain Ryan Shawcross this week. 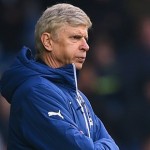 The Potters defender indicated that supporters of his club ‘dislike’ the Gunners which could make for a tough encounter at the Britannia Stadium on Saturday.

Relationships between the two clubs have soured dramatically since Shawcross badly broke Aaron Ramsey’s leg with a horror tackle back in 2010 but Wenger is hoping that the fans of both teams put that aside when they meet on the weekend.

“I think that (Shawcross’ claim) is exaggerated,” Wenger said. “It is a football game, it is not a hate game.

“Stoke is always a tough and very committed place to go, but we prepare ourselves to be at the level of our commitment and dictate the way we want to play. The most important thing is to not forget how we play our game.

“They have a little bit of a different style (under new manager Mark Hughes), but against us it is always a very committed game anyway.”

Arsenal currently sit sixth on the Premier League table with 23 points from 14 matches while Stoke are 13th after recording 15 points.