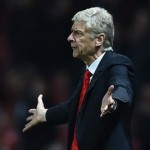 A Kieran Gibbs own goal and a late effort from skipper Wayne Rooney handed United their first victory on the road in over seven months, with Arsenal only able to manage a consolation through substitute Olivier Giroud.

The 65 year old saw his side slip to eighth and the Frenchman was left frustrated after seeing his side start the match so well.

“It’s a game that we dominated for 80 per cent of the time and we haven’t dominated a game like that against Manchester United for a long time,” he said.

“At the end of the day we were not efficient enough in the final third, defensively and we made a mistake at the back which they took advantage of. That’s the history of the game. We had plenty of chances. Their keeper is man of the match. That tells you the story of the game.

“Once we were 1-0 down we had of possession in the final third that they had to defend. We missed a few opportunities in the second half, even in the final 20 minutes. At the moment defensively we are a bit naive.”