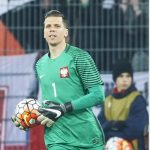 Reports are out claiming that Arsenal goalkeeper Wojciech Szczesny isn’t anxious about where he’ll be playing next season.

The Poland international goalkeeper spent last term on-loan with Roma and has been linked with Napoli.

“I’m pleased that the Coach made me play for 90 minutes [in Wednesday’s 2-1 defeat to Netherlands],” he told Super Express.

“I tried to do my best and I’m focused on this, although I don’t know if it means that I’m the Coach’s first choice.

“Difficult pitch? I won’t look for excuses such as a muddy pitch or heavy legs. Surely it’s better to analyse a game that you’ve won, but we lost.

“Still, our morale remains high, and we haven’t forgotten that we lost against a very strong team, even if they haven’t qualified for European Championship.

“Will I play against Lithuania? I don’t know, but if the Coach picks me then I’ll try to do the best I can.

“Am I worrying about where I’ll play next season? Not at all.”