It has been revealed that Arsenal striker Yaya Sanogo has been taken aback by the physical demands of the Premier League. 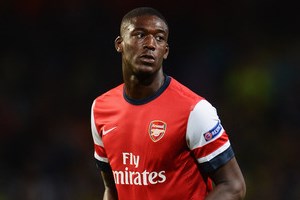 The French U21 international striker arrived from Auxerre on a free transfer this summer.

The 20 year old said: “I think I’ll have to toughen up and improve my strength.

“That’s part and parcel of such an intense league as the Premier League.” You Will See The Best Of Me! – Arsenal Midfielder Jack Wilshere