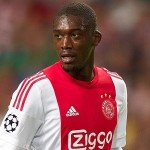 Reports are out claiming that Arsenal striker Yaya Sanogo made his first meaningful contribution as an Ajax player at the weekend, earning a late penalty as the Dutch giants drew 2-2 with FC Twente.

Twente stunned the visitors by racing to a two-goal lead, before Viktor Fischer pulled one back for Ajax.

Sanogo, was then fouled by Twente keeper Joel Drommel late in the game, as he raced onto a ball in the area. Nemanja Gudelj made no mistake from the resulting penalty to earn the reigning champions a point.

22-year-old has endured a rough start to life in Holland, having been dropped to the reserves and described by club coach Ronald De Boer as having “no qualities”.