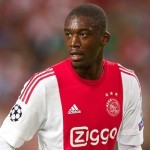 Ajax played a friendly against Qatar’s Umm-Salal on Monday, winning the game 6-1.

Sanogo struck his hat-trick inside the first-half, with Lasse Schone grabbing a brace.

Frenchman Sanogo is on a season-long loan with Ajax.