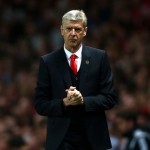 Arsenal boss Arsene Wenger has admitted that he faces a difficult summer over his transfer plans.

Players such as Lukas Podolski, Yaya Sanogo and Joel Campbell are all set to return for pre-season training from loan spells, and Wenger admits he has a balancing act to perform.

Asked if players had to go out before others could come in, Wenger added: “Chronologically you do not always decide that. Sometimes you have to decide ‘okay, we have an opportunity, we do it and after we will see how we deal with the rest’.”