It has been reported that Arsenal boss Arsene Wenger is confident they’ll improve their goalscoring next season. 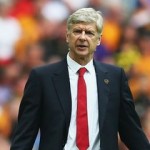 The Gunners ended the 2013/14 campaign seven points behind Manchester City after scoring 68 goals in their 38 matches – their lowest top-flight tally for five years.

“This time we missed goals,” he told Arsenal Player.

“We missed goals [during the season] and that’s what we want to improve [on].

“Maybe that highlights one of the negatives of our season – the injuries we had at the crucial part of the season. The injuries were on offensive fronts and Walcott and Wilshere and Podolski and Chamberlain and Ozil were all injured together.

“So that is of course something that diminished, and losing Ramsey as well diminished our offensive potential. I’m sure we’ll come back next season and score more goals.”