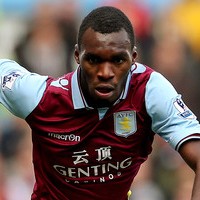 Arsene Wenger has admitted that he is a fan of Aston Villa powerhouse Christian Benteke.

The 21 year old Belgian international dropped a bombshell last week when he revealed he loves the Gunners and only joined Villa as a stepping stone to bigger things.

So Benteke will be pleased to hear he is on Wenger’s radar.

He said: “We have looked at him but we had already signed Giroud who had a clause in his contract, so that was an easy decision.”