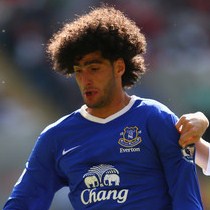 Before his goal in yesterday’s draw, the Arsenal boss admitted his admiration for the Belgian saying : “I just think he is a good player. Everton’s offensive game turns around him. He is the target man they look for, and in recent years he is moving further forward.

“When he arrived at Everton he was more defensive. Now he is more forward and it looks like he will finish centre-forward. He uses his body well, but he is not a dirty player. He is an intelligent player.”

And Wenger likes intelligent players. So could Fellaini do a job at Arsenal? Wenger smiled and replied: “Yes”.