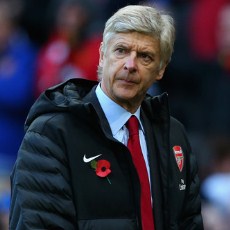 Arsene Wenger has admitted that Arsenal’s season is slipping away after defeat at Manchester United.

The Gunner’s boss admits recent performances have not been good enough and is hoping his team can rapidly recover their form.

“We were poor today defensively I think,” Wenger said after the game at Old Trafford.

“There’s no obvious reason [for that] apart from the fact that we didn’t start well and that Man United have quality up front. They score goals against everybody and [were] better than us. It’s as simple as that.

“I think today we were not good. At Man City, we played a 1-1. We had a good result and didn’t suffer from [the] comparison. Today, I just think at the moment we are not on full cylinders and we looked much more vulnerable defensively than we were at the start of the season.

“That’s what we have to show [that the team can compete for the title]. At the moment, you cannot say that because we are far away. But that’s what the target is until the end of the season.

Jack Wilshere : Give Capello A Break!