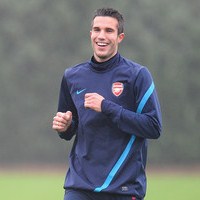 The Dutch international striker has scored 13 times in the Premier League alone this season – half of Arsenal’s top-flight tally – but Wenger is confident that others will step up when he is absent.

“At the moment I can’t deny that [we rely on him for goals] but I believe that the likes of Gervinho, Aaron Ramsey and Theo Walcott can score goals and I believe they will,” he told Arsenal Player.

“They can score goals, I am completely confident of that. And they will score. At the moment Robin is always on the end of things. I think he will continue but I also think it will change that the other players will score goals as well.”