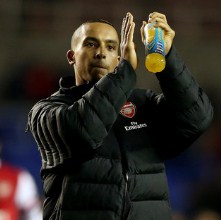 Arsene Wenger has declared that the ball is in Theo Walcott’s court over their contract wrangle.

The Frenchman deployed Walcott in the player’s preferred central attacking role against Reading, and felt it was an “encouraging” display.

The Arsenal manager is hopeful an agreement can be reached sooner rather than later.

“Theo has been educated at Southampton and Arsenal, where he has become a top level player here.

“I hope that when he considers his future he will think this is the best place for him and sign for us.

“I will just say our desire and will is clear, and Theo knows that. Hopefully we can get to a happy end with it.”