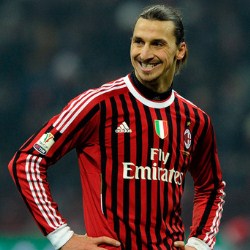 Arsene Wenger has revealed that he tried to sign Zlatan Ibrahimovic when the AC Milan striker was a junior player.

Talking ahead of returning to the ground that his team beat Milan on in 2008 at this same stage of the competition, Wenger identified the key threat in the opposition – Ibra.

“He is a great player,” Wenger told Arsenal’s official website.

“If you look at his record, at what he has won, he has his own personality based on a strong belief in himself.

“That is a quality at the top level that can sometimes be seen as over-confidence but I don’t think he is because he turns up with performances in the big games.

“That’s why I believe he was at the Arsenal training ground before his career. Before he moved to Ajax we were interested in him, and he made a great career.” Mesut Ozil On The Brink Of Making Arsenal Comeback