Arsenal boss Arsene Wenger strongly believes that new signing Mesut Ozil will only continue to improve as he adjusts to life with the club. 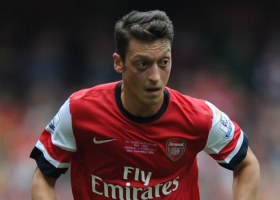 The German international, who joined from Real Madrid for £43million on deadline day, provided three assists as the Gunners beat Stoke City 3-1 at the Emirates Stadium on Sunday and his manager feels he will only get better the more time he spends in north London.

Wenger said : “I believe that once he is completely integrated we will see even more of him, but he has shown today that he is a great player,”.

“Ozil is a player, when you look at his numbers, the assists are not a coincidence, it is just the reality of his game.

“You could see today he has a good pace as well. At the moment he focuses a lot on his passing, but he can create individually as well.”

In regards to Arsenal’s chances of winning a trophy this season, Wenger added: “Ozil gave a lift to everybody at the club and, for the rest, it will be the quality of our teamwork and our team play that will decide that.”