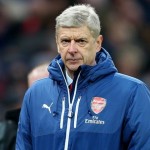 Reports are out claiming that Arsenal boss Arsene Wenger feels a full summer of football has hurt his team.

The French tactician attributes some of his problems to the World Cup, which he believes has influenced players physically and mentally.

“After the World Cup, we had too many players who were not at their level,” said Wenger. “Too many came back not ready to compete again. Then you look again at the number of players we lost when they were just back to their best.

“We had no Walcott, no Wilshere, no Ozil, no Debuchy, no Koscielny, no Arteta for too long periods. No Giroud for three months. It’s like you have half of the squad out!”