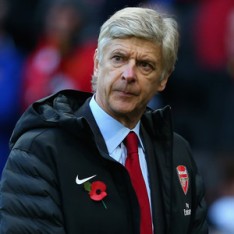 It is said that the red card shown to Jack Wilshere has upset the French tactician.

And he was unhappy with the penalty United won after Santi Cazorla was penalised for handling an Ashley Young cross.

He said: “We always have a penalty against us when we play United so we get used to it.”