Reports are out claiming that Arsenal boss Arsene Wenger believes the Gunners can win three trophies, providing they enjoy a certain amount of good fortune. 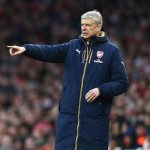 Arsenal remain in contention for success on three fronts, the FA Cup, Premier League title and the Champions League.

“It is [possible] because some clubs have done it,” he said. “Bayern have done it. It is difficult to compete on three fronts.

“If you ask me is it possible to win on three fronts, it is a little bit different. Exceptionally, it can happen. But you need not to have any bad injuries and to have a basis of a team who can repeat performances.

“Maybe to be above everyone else, like Bayern were, like Barcelona were last year. It is difficult. Maybe in Spain even more because they play two legs in the cup.” Danny Welbeck Will Be A Great Asset! – Ex-Arsenal striker Woodcock