It has been reported that Arsene Wenger is concerned over Jack Wilshere’s call-up to the England squad for their friendly with Scotland. 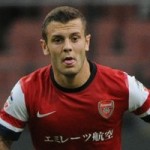 The London Evening Standard says it is understood that as recently as last night, the Arsenal midfielder believed he was not in the squad and had made plans accordingly after being told Wenger was reluctant to release him so close to Arsenal’s first competitive match.

It is said that talks between Wenger and Hodgson took place last night and although Wilshere is progressing well in his recovery from ankle and knee problems that have severely hampered his career in the last two seasons, the Gunners boss is concerned that any additional workload could cause a setback.

Arsenal now expect Wilshere to join up with the squad on Sunday but Wenger is thought to have privately expressed his reservations to Hodgson about the 21-year-old having any prolonged involvement.

Arsene Wenger Confident Theo Walcott Can Play As A Striker