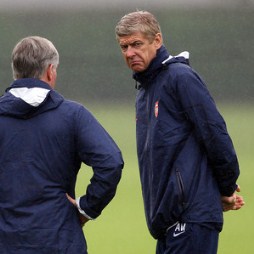 Arsene Wenger believes Arsenal is capable of overcoming their recent tough time as Samir Nasri gets set to depart for Manchester City.

This summer has already seen the Gunners lose captain Cesc Fabregas to Barcelona as well as a poor start to their Premier League campaign which has seen three players receive red cards in the opening two matches.

However Wenger is confident that the North Londoners can get past all of this ahead of tomorrow night’s vital Champions League qualifier at Udinese.

He told Sky Sports News : “There is also a concern but not an excuse, you are always concerned of the consequences that it can have on the team,”.

“It can also have a positive consequence. If you are strong mentally you can increase the solidarity knowing that you have to fight more.

“And that’s what you ideally want from mentally strong players.”

As for losing Fabregas and now Nasri, the Frenchman insists the players he has purchased will add to his squad but understands he needs some reinforcements.

“I bought some great players as well,” he added.

“We have bought in Chamberlain and you will see that he will be a great player, Gervinho as well.

“But ideally you want more, we are short in midfield at the moment and that is where we need to strengthen.” AS Roma To Beat Arsenal For Barcelona Starlet Toni Sanabria