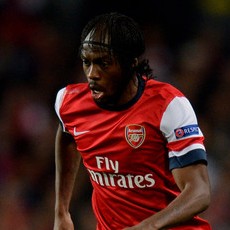 Arsene Wenger is confident that Gervinho can follow in the footsteps of the likes of Thierry Henry and Robin van Persie.

The 25 year old Ivory Coast international is relishing his central attacking role with five goals already this season and the Arsenal boss is backing him to become a star in North London after moving from a wide positon.

“I did that with Robin van Persie. He was more a technical player, it was not obvious to put him central striker,” said Wenger.

“I did it with Thierry Henry, I did it now with Gervinho and I think I will do it as well with [Theo] Walcott.

“They have other qualities that are well suited to our game. Our game is based on movement and technical ability and they have that.”