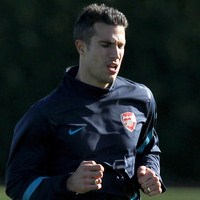 The in-form Dutch striker is out of contract in 18 months but Gunners fans want assurances that he will remain committed to the cause following the summer departures of former skipper Cesc Fabregas and key players Samir Nasri and Gael Clichy.

Wenger believes he will pledge his allegiances to the North Londoners, telling the BBC: “He has 18 months to go and I’m confident he’ll sign a new deal. I’m always confident.” Napoli Not Interested In Selling Lorenzo Insigne To Arsenal, Tottenham