Arsene Wenger Confident The Goals Will Flow For Arsenal 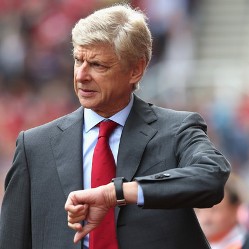 Arsene Wenger is remaining calm regarding his sides lack of goalscoring exploits so far this season.

The Gunners were held to a second consecutive scoreless draw today with Stoke City able to frustrate them at the Britannia Stadium but the French manager is not too worried about things up front, especially as the defence has things sorted in the back third.

Wenger told Sky Sports : “Overall, I feel we had a solid performance,”.

“We were not in trouble defensively and we created some chances that we couldn’t take.

“We don’t take our chances, but it was a solid game with a dominant spirit and overall I believe there’s a lot of positives in there.

“The negative is that we couldn’t score for two games now, but I believe that will come. There are many new players and to find each other in the final third may take a little bit more time.

“The organisation and technical level was good, but we missed a bit in the final third. The adjustment of our passing, and the spontaneous way to take our chances, is not completely automatic, so we still have some work but there’s a lot of positives.”