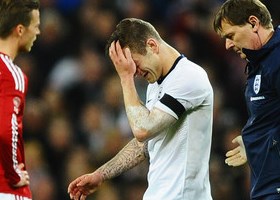 Wilshere is facing six weeks out with an ankle injury suffered with England in midweek.

Wenger told the London Evening Standard: “Yes. There are 11 weeks to go, he will be out for six before he can absorb normal training. The maximum after six weeks before being competitive in a game [is another two weeks] because he will work on his fitness during his injury.

“His injury will not stop him working on fitness. Two weeks after he should be competitive. That means the maximum to be competitive in a game is eight weeks.

“Any player who has an opportunity to go to the World Cup, you do not want to talk him out of that, it is a lost job.

“You want to encourage him to go to the World Cup and show (his talents) because you know the meaning it has to go to a World Cup for a player is immense, and I will do absolutely everything that he can get there.”