Arsenal boss Arsene Wenger has declared that the backlash from their collapse against Anderlecht isn’t affecting his squad. 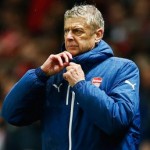 The Arsenal manager, who was branded “tactically clueless” by former Gunner Paul Merson, says he is not surprised by the level of criticism he has received after the Gunners let a three-goal lead slip against the Belgian champions.

“Inside the camp we are very positive,” he said. “When we do not win, we are not happy. The rest, we can live with. We are not touched by that [the negativity].”

When asked whether he was surprised by the level of criticism, Wenger replied: “No. If you are 3-0 up and get back to 3-3, you always get the same. I have managed 2,000 games and can anticipate what people will say.

“You always get taught lessons from people after the game but before the game, our only target is to win.”